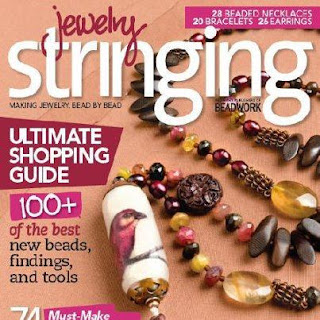 My friend Wenche Brennbakk, a superstar in the world of jewelry design who lives in Mo I Rana, Norway, emailed me yesterday to tell me we are sharing the cover of the Fall issue of Jewelry Stringing Magazine!

I am sure you have seen Wenche's beautiful work in the pages of Bead Trends magazine, too, where she is a regular contributor.  She also has a shop at Etsy called Wenche Design.  I hope you'll check it out, because Wenche creates the most exquisite jewelry you have ever seen.  She is also one of the nicest, sweetest people I've never actually met!

I first came to know Wenche from the customer gallery at Lima Bead, where we both have photos of our work posted.  She has a wonderful sense of color and composition that makes my mouth water.  The "bird bead" featured in the necklace was a custom order I created for her.  I cannot tell you how thrilled I am to have had a part in the creation of this gorgeous necklace.   I am still doing the happy dance over the news of the cover.

Stringing's Fall issue goes on sale here in the U.S. at newsstands on August 21st.  I can always find it at my local Hobby Lobby store, too, but if you see me in line ahead of you, you probably want to go somewhere else for your copy.  I intend to buy them out!

Wenche, thanks again for giving me the opportunity.   I really needed this pick-me-up this week and cannot tell you how much it means to me!   You are the best!

The Joke Is On Me

Yep, finally bowed to the pressures of marketing a virtual business and registered at Facebook.   All of you who heard me insist you would never in a million years find me there, feel free to laugh your heads off.  I still don't like it, in fact that is not nearly strong enough to convey how I feel about FB, but even I'm not stupid enough not to realize that if you want to market your work, you have to have a presence there.  So, here I am, kicking and screaming while being dragged into this bold, new world.  I blog, I tweet, I flickr and now I facebook.   Now I have to figure out how to get the little "Like Me" thingy here on the blog.   Anyone know?  I couldn't find the app or whatever anywhere on FB.

So, I would love for you to stop by and visit my page, look at my profile, and make me a friend or like my page.   Please.  Otherwise, I'll feel even more of a hypocrite.

Now, off to check out Google AdWords.... Hee Hee.

Thanks so much, friends!
Lynda 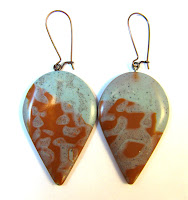 It felt so good to get my hands on a bunch of polymer clay again.  I spent the weekend trying to get the cobwebs out of my brain and back into creative mode.

I don't know about you, but when I get back into the studio after being away from it for awhile, I try to keep my expectations low for the first couple of pieces.  I call them the throwaways.  They usually don't even make it into the Butt Uglies jar.  They go straight to the trash can.

I started with two basic color batches:   One with tomato red, olive green, white, black, and a touch of lavender.   The other batch was slate blue, tan, brick red, black and white. 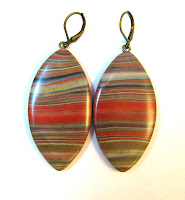 The first color batch was intended for more pieces to add to my Southwestern Landscapes series.


The series is very popular with my local customers and my Etsy shop customers, and I can always use more inventory, so I started with some simple marbled earrings.  favorite.  Making earrings has become my new favorite thing to do with polymer. 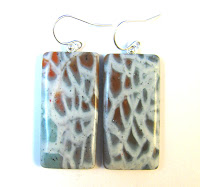 I used to resist them, because my OCD tendencies would kick in and I would get very frustrated if both pieces in a pair weren't exactly the same.


Earrings are also popular with my customers, and I can't make too many to have on hand, so I decided this past weekend the Studio would be Earring Central.


I changed the color palette a little and deleted the olive green and added some slate blue and a good bit of translucent clay. 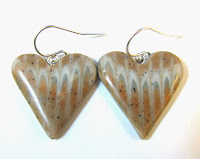 This "bargello" pattern is a favorite I've used several times.  It's a rounded bargello, not a zig zag pattern, but I still think it qualifies.

These little heart earrings are really sweet, unfortunately, the photos don't do them justice.


Next weekend, I hope to get started on some new tutorials.  I'm still taking suggestions, if anyone has any ideas for topics. 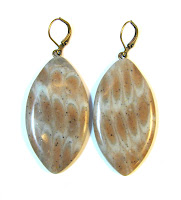 I cannot believe I haven't blogged since the middle of May.   Where the heck have I been?
Well, I was trying to get a book outline done, and after four months, I have decided a book will have to wait.  Working on it caused me to ignore several areas of my creative life that I just can't ignore any longer.  My studio is under a layer of dust at this point!   Google instigated a new interface while I was gone, which caused me to have to download Google Chrome, which messed with many of my settings so that some of my programs wouldn't work, and it has been a major hassle trying to get everything back the way it should be.

I have not been completely happy with the book so far, so I have decided to shelve (no pun intended) it for now.  I want to do some experimenting with some translucent clay, but being on a deadline, even a self-imposed one, just takes too much fun out of the creative process for me at this point.

I have also been spending a lot of time lately with my mother, who has ensnared me in her genealogy projects.  I have been a genealogist for 35 years, but until recently, my efforts have been concentrated mainly on my father's side of the family.

Momma and I have had a great time discovering, confirming and even debunking some oral family history from her side of the family.   She is not really comfortable zipping around the internet, and had amassed a ton of paper, so I have spent a lot of time lately setting up a good genealogy software program on her computer which incorporates information from ancestry.com, a huge improvement over the way she had been previously gathering information... which has lead to a housecleaning of sorts.   Last week while I was officially on vacation, we managed to sort and discard much of that ton of paper, to bring her into the 21st century!

I also want to write some new tutorials.  I had a lovely compliment given to me by a customer this week about the faux bone and ivory tutorial, which is inspiring me to come up with some new topics.   I am also open to suggestions for polymer clay tutorial topics, so if anyone cares to offer up some, just post them here or email me.

LEARN TO CREATE WITH POLYMER CLAY MY WAY! 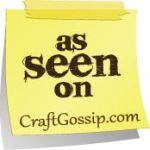 Nothing Could Be Finer Than To Be In Carolina

More Of My Designs